Of course, you don’t really know Lt. General Patricia D. Horoho, since these are stolen photos used by African Romance Scammers, but she is popular! 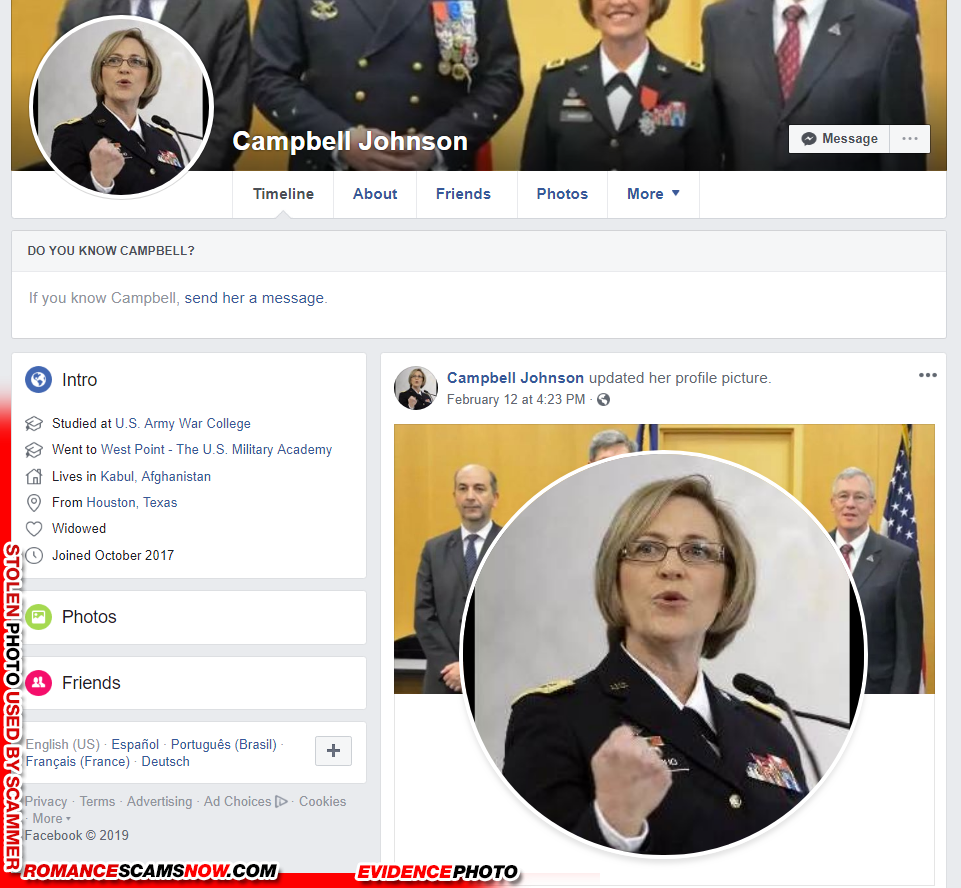 Remember Lt. General Patricia D. Horoho’s face for the next time you see her!

Here is a gallery of Lt. General Patricia D. Horoho’s photos we have found used by Romance Scammers:

Do you have or have seen other photos of Lt. General Patricia D. Horoho? Send them to us on our Report Scammer form »

WARNING:
Do Not Contact Her – You Do Not Have A Relationship With Her!
She Is Not Living In Ghana & The Real Person Does Not Know You!
She Does Not Want To Hear From Men Who Have Fallen In Love With Her Face!
She Is A Victim Also And Deserving Of Her Privacy And Respect
She Already Knows Her Identity Has Been Stolen And Used By Scammers

RSN™ Team
A SCARSSCARS SCARS - Society of Citizens Against Relationship Scams Inc. A government registered crime victims' assistance & crime prevention nonprofit organization based in Miami, Florida, U.S.A. SCARS supports the victims of scams worldwide and through its partners in more than 60 countries around the world. Incorporated in 2015, its team has 30 years of continuous experience educating and supporting scam victims. Visit www.AgainstScams.org to learn more about SCARS. Division
Miami Florida U.S.A.

TAGS: Stolen Identity, Stolen Photos, ImpersonationImpersonation An impersonator is someone who imitates or copies the behavior or actions of another. There are many reasons for impersonating someone, such as: part of a criminal act such as identity theft, online impersonation scam, or other fraud. This is usually where the criminal is trying to assume the identity of another, in order to commit fraud, such as accessing confidential information or to gain property not belonging to them. Also known as social engineering and impostors., Romance ScamScam A Scam is a confidence trick - a crime -  is an attempt to defraud a person or group after first gaining their trust through deception. Scams or confidence tricks exploit victims using their credulity, naïveté, compassion, vanity, irresponsibility, or greed and exploiting that. Researchers have defined confidence tricks as "a distinctive species of fraudulent conduct ... intending to further voluntary exchanges that are not mutually beneficial", as they "benefit con operators ('con men' - criminals) at the expense of their victims (the 'marks')". A scam is a crime even if no money was lost., Fake Female, Imposter ScamImposter Scam A caller poses as someone you know or trust in order to obtain money or personal information. They often spoof a legitimate caller's number to appear more realistic., Love ScammerLove scammer Dating scammers or love scammers create fake identities on dating apps and social media to coax you into fake online relationships. They often quickly move to personal channels such as phone or email, using your trust to acquire money or personal info, or help you hide their criminal activities. You'll probably never meet them in person. This is a relationship scam., Romance ScammerScammer A Scammer or Fraudster is someone that engages in deception to obtain money or achieve another objective. They are criminals that attempt to deceive a victim into sending more or performing some other activity that benefits the scammer., Ghana Scammer, Nigerian Scammer, Fake Woman, Fake Profile, Fake Identity, U.S.Army, Lt. General, Patricia D. Horoho, Fake Soldier,