How You Just Might Get Your Money Back! – A SCARS™ Special Report

SCARS RomanceScamsNOW.com Home | ♠ MASTER TOPICS | ♦ ABOUT ADVOCACY & ACTIVISM | How You Just Might Get Your Money Back! – A SCARS™ Special Report
Previous Next

How You Just Might Get Your Money Back! – A SCARS™ Special Report

SCARSSCARS SCARS - Society of Citizens Against Relationship Scams Inc. A government registered crime victims' assistance & crime prevention nonprofit organization based in Miami, Florida, U.S.A. SCARS supports the victims of scams worldwide and through its partners in more than 60 countries around the world. Incorporated in 2015, its team has 30 years of continuous experience educating and supporting scam victims. Visit www.AgainstScams.org to learn more about SCARS.™ Special Report: How You Just Might Get Your Money Back!

The following is an editorial and is NOT intended to express a legal opinion. We strongly recommend that all matters of law be discussed and reviewed with a licensed attorney.

What is a Small Claim?

Small-claims courts have limited jurisdiction to hear civil cases between private litigants. Courts authorized to try small claims may also have other judicial functions, and go by different names in different jurisdictions. For example, it may be known as a county or magistrate’s court.

A Small-Claims Court Generally Has A Maximum Monetary Limit To The Amount Of Judgments It Can Award, Often In The Thousands Of Dollars/Pounds.

By suing in a small-claims court, the plaintiff (you) typically waives any right to claim more than the court can award. The plaintiff may or may not be allowed to reduce a claim to fit the requirements of this venue – so you might have to plit the amounts based upon specific transfers. This means that if you lost $100,000 you probably could not sue, but if you lost $4,000 you probably could – you would have to review the limits in your locality.

To bring the case to small-claims court, the plaintiff must prove that actual damages are within the court’s jurisdiction (meaning you lost money where the court is – such as you sent the money from a local money transfer service or your local bank).

The rules of civil procedure, and sometimes of evidence, are typically altered and simplified to make the procedures economical in small claims court

A usual guiding principle in these courts is that individuals ought to be able to conduct their own cases and represent themselves without a lawyer.

Rules are relaxed but still apply to some degree.

Expensive court procedures such as interrogatories and depositions are usually not allowed in small-claims court, and practically all matters filed in small-claims court are set for trial. Under some court rules, should the defendant not show up at trial and not have requested a postponement, a default judgment may be entered in favor of the plaintiff immediately.

Trial by jury is seldom or never conducted in small-claims courts; it is typically excluded by the statute establishing the court.

Winning in small-claims court does not automatically ensure payment in recompense of a plaintiff’s damages. This may be relatively easy, in the case of a dispute against an insured party or corporation. The judgment may be collected through garnishment and liens.

In many countries what you receive from a judgment may also be tax-free – you would be advised to explore that with a tax professional.

Most courts encourage parties with disputes to seek alternative dispute resolution, if possible, before filing suit. For example, both parties can agree on arbitration by a third party to settle their dispute outside of court, though while small-claims court judgments can still be appealed, arbitration awards cannot.

HOW MIGHT YOU USE THIS IN THE CASE OF SCAMSScams A Scam is a confidence trick - a crime -  is an attempt to defraud a person or group after first gaining their trust through deception. Scams or confidence tricks exploit victims using their credulity, naïveté, compassion, vanity, irresponsibility, or greed and exploiting that. Researchers have defined confidence tricks as "a distinctive species of fraudulent conduct ... intending to further voluntary exchanges that are not mutually beneficial", as they "benefit con operators ('con men' - criminals) at the expense of their victims (the 'marks')". A scam is a crime even if no money was lost.?

Of course, it is ridiculous to think you can sue a scammerScammer A Scammer or Fraudster is someone that engages in deception to obtain money or achieve another objective. They are criminals that attempt to deceive a victim into sending more or performing some other activity that benefits the scammer. in Africa, but how about the company the brought the two of you together? Social media, communication appsApps Applications or Apps An application (software), commonly referred to as an ‘app’ is a program on a computer, tablet, mobile phone or device. Apps are designed for specific tasks, including checking the weather, accessing the internet, looking at photos, playing media, mobile banking, etc. Many apps can access the internet if needed and can be downloaded (used) either for a price or for free. Apps are a major point of vulnerability on all devices. Some are designed to be malicious, such as logging keystrokes or activity, and others can even transport malware. Always be careful about any app you are thinking about installing., and dating websites are certainly located in the U.S. and also in many other Western Countries.

We cannot tell you exactly how to conduct such a trial, but in our opinion, these companies are certainly negligent in the enforcement of their policies and in responding to reports of fake and fraudulent accounts. They allow an environment where scammers have uncontrolled access to potential victims and fail to provide real countermeasures or properly warn their customers of the risks of their platforms. In most cases, this could create potential liability and would be the approach we would take if we were a damaged party – in other words, a victim!

If you needed proof that Facebook was negligent – for example fails to remove scammer’s fake accounts AFTER being notified, we would be happy to supply such proof.

Remember that major companies are bullies and they will use tactics to have small claims cases thrown out, but because of the limitations of such courts, they are also limited. Most likely such cases will go to arbitration and a settlement agreed upon – it is frequently cheaper to settle than to try a case. Plus with a lawsuit, no matter how small, your local press will eat it up!

Just remember, we are not attorneys and cannot give you legal advice without a license. We advise you to speak to an attorney for such advice.

Our goal is to present a concept. A concept that allows normal people to use the small claims court to their advantage.

Remember, those big companies neither like bad publicity nor like wasting money. A settlement is much easier than the alternative. And since most victims have losses of a few thousand, this may be an ideal opportunity.

After all, what do you really want? You want your money back – just don’t ask for an apology or an admission of guilt, that they probably never do. But this may be as close to justice as you will ever get!

Building A Body Of Support

Please make sure that if you go forward with cases such as these that you keep us informed about your case so that we can share both your action with the world and if you need help, that we can provide you with examples of negligence, and if you are successful that your strategies can be shared with others to help them recover money as well.

You can also use small claims to recover your money from entities in your same country that received your money, such as money mulesMoney mules Money mules are a type of money laundering where a person transfers illicit funds through a medium (such as a bank account) to obfuscate where the money came from. There are different types of money mules including witting, unwitting, and complicit..

Here is an excellent guide to Small Claims, but in truth, you can find all you need online with a little research.

Additional Articles For Your Review

We wish you good hunting and make the bastards pay! 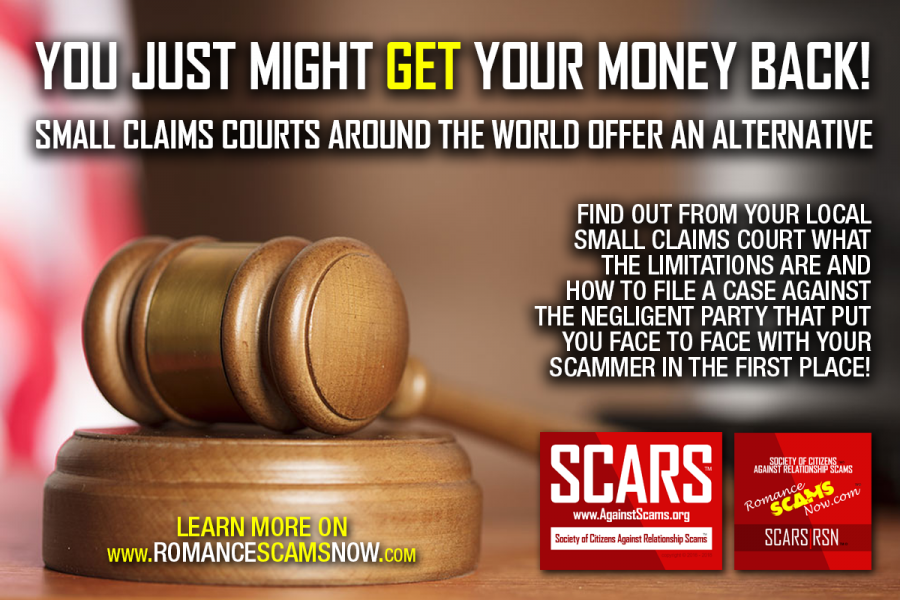 SCARS, RSN, Romance Scams Now, SCARS|WORLDWIDE, SCARS|GLOBAL, SCARS, Society of Citizens Against Relationship Scams, Society of Citizens Against Romance Scams, SCARS|ANYSCAM, Project Anyscam, Anyscam, SCARS|GOFCH, GOFCH, SCARS|CHINA, SCARS|CDN, SCARS|UK, SCARS Cybercriminal Data Network, Cobalt Alert, ScamScam A Scam is a confidence trick - a crime -  is an attempt to defraud a person or group after first gaining their trust through deception. Scams or confidence tricks exploit victims using their credulity, naïveté, compassion, vanity, irresponsibility, or greed and exploiting that. Researchers have defined confidence tricks as "a distinctive species of fraudulent conduct ... intending to further voluntary exchanges that are not mutually beneficial", as they "benefit con operators ('con men' - criminals) at the expense of their victims (the 'marks')". A scam is a crime even if no money was lost. Victims Support GroupSupport Group In a support group, members provide each other with various types of help, usually nonprofessional and nonmaterial, for a particular shared, usually burdensome, characteristic, such as romance scams. Members with the same issues can come together for sharing coping strategies, to feel more empowered and for a sense of community. The help may take the form of providing and evaluating relevant information, relating personal experiences, listening to and accepting others' experiences, providing sympathetic understanding and establishing social networks. A support group may also work to inform the public or engage in advocacy. They can be supervised or not. SCARS support groups are moderated by the SCARS Team and or volunteers., are all trademarks of Society of Citizens Against Relationship Scams Incorporated.