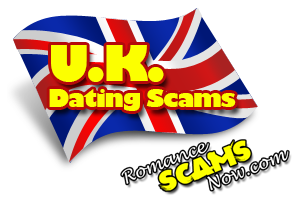 UK Dating ScamsScams A Scam is a confidence trick - a crime -  is an attempt to defraud a person or group after first gaining their trust through deception. Scams or confidence tricks exploit victims using their credulity, naïveté, compassion, vanity, irresponsibility, or greed and exploiting that. Researchers have defined confidence tricks as "a distinctive species of fraudulent conduct ... intending to further voluntary exchanges that are not mutually beneficial", as they "benefit con operators ('con men' - criminals) at the expense of their victims (the 'marks')". A scam is a crime even if no money was lost. Move Up To Extreme Levels

According to UK crime statistics shared with Romance Scams Now, the world of Dating Scams in the United Kingdom have entered a dangerous new phase.  And it is coming from both Russians and Nigerians living in England and the U.K.

What we are talking about is similar to the trend in the U.S. up to about 2001.  In those days the Russian mob was using online dating as a way to identify targets.  After the online dater had been down the path for a while, Russian Mobsters show up at the male daters home unannounced, and make their demands.  These were anything from money to valuables.  Their leverage was that they knew huge amounts of information shared by the male dater, about their jobs, their businesses, and even their children.  The only good news was that the mobsters were not greedy, they collected a few thousand dollars and moved on.  However, because the the threat of retribution and embarrassment, few ever filed criminalCriminal A criminal is any person who through a decision or act engages in a crime. This can be complicated, as many people break laws unknowingly, however, in our context, it is a person who makes a decision to engage in unlawful acts or to place themselves with others who do this. A criminal always has the ability to decide not to break the law, or if they initially engage in crime to stop doing it, but instead continues. complaints.  One estimate had as many as 7,000 victims of this in 2001 alone – of course the good news was that this shut down with September 11, 2001.  It still happens, but a wise man has little to fear in the U.S.

We are now seeing exactly the same thing emerge again.  For those not familiar, this is similar to the plot of the 2001 film “Birthday Girl” staring Nicole Kidman, as a Russian Online Bride who comes to England, only to have her “Russian Friends” show up and demand that the man rob a bank.  This is a must see for any online dater.

We have learned that lately, the Nigerians are also in the mix, hooking men and women online, then having UK locals show up for the cash.  Because the victim really only knows the person in Nigeria or Western Africa, the local policeLocal Police The Local Police is your first responder in most countries. In most English-speaking countries and in Europe report to them first. In other countries look for your national cybercrime police units to report scams to. In the U.S., Canada, & Australia, you must report to the local police first. are almost powerless to do anything other than arrest every Nigerian – hmmm, maybe that’s not such a bad idea?  Seriously though, we have heard that there are an increasing number of these crimes in the Midlands and elsewhere.

Our advice is this:

FIRST VERIFY where your other person is.  If anywhere in Africa – back away fast!

SECOND if Russian or Eastern European, arrange to meet before sharing too much information.  You will spend a little more up front, but have a better idea of who you are talking to.  By the way, do not meat in their country, meet somewhere else in Western Europe on neutral ground.

THIRD  avoid Africa, Eastern Europe, the Philippines, Malaysia, and Indonesia – all are now hotbeds of online scammers, and places where kidnapping is rampant.

FOURTH if you are looking overseas stick to Latin America and mainland Asia.

Best of luck to you all, but always be watchful.