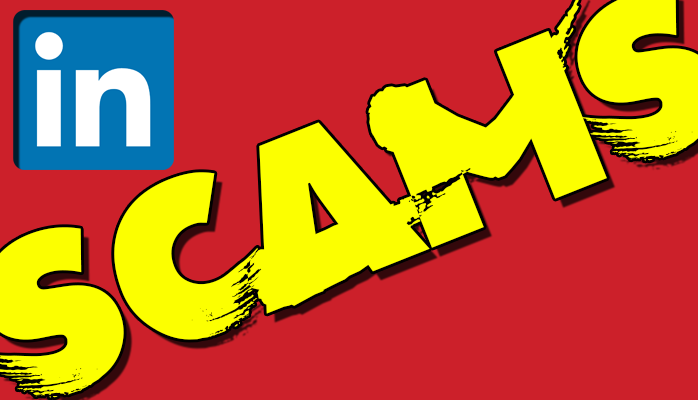 Online scamsScams A Scam is a confidence trick - a crime -  is an attempt to defraud a person or group after first gaining their trust through deception. Scams or confidence tricks exploit victims using their credulity, naïveté, compassion, vanity, irresponsibility, or greed and exploiting that. Researchers have defined confidence tricks as "a distinctive species of fraudulent conduct ... intending to further voluntary exchanges that are not mutually beneficial", as they "benefit con operators ('con men' - criminals) at the expense of their victims (the 'marks')". A scam is a crime even if no money was lost. are Nothing New!

We have been dealing with scammers since the Nigerian discovered email!

However, the scammerScammer A Scammer or Fraudster is someone that engages in deception to obtain money or achieve another objective. They are criminals that attempt to deceive a victim into sending more or performing some other activity that benefits the scammer. community, particularly that of Western Africa has discovered LinkedIn in a big way.

As the creator of what may have been the first dating site back in ’95, I have watched that world with interest for 20 years, and see how overwhelmed online dating is with fake profiles and rampant scams. Some estimate that as much as US$800,000,000.00 per year flows into the Nigerian economy from scamming alone. There may be another $500,000.000.00 into the rest of Western Africa. I am also the publisher of one of the top-three Anti-Scammer websites (RomanceScamsNow.com), which I began some years ago after a close friend lost over $20,000.00 to a Ghanaian scammer. I, and my staff have been watching this problem for many years evolve and explode.

In a recent survey conducted by our site of 30,000 of our site visitors, the overwhelming attitude is that online dating is flooded with scammers and no longer works. A message that has been born out in the most recent lawsuit against a principal online dating site, accused of allowing scamming to proliferate, since their business model is based on being able to justify fees based upon the total number of active profiles. This is the common model throughout the online dating business. Unfortunately, it appears that in that world self-policing has failed to both protect the businesses and their customers.

It should come as no surprise that as the scammers grew more sophisticated that they moved into Facebook and Google+ in a big way. Some claim that as many as 20% of Facebook accounts are fake. While I think that number is lower, I agree that almost every Facebook user has encountered a scammer or fraudsterFraudster A Scammer or Fraudster is someone that engages in deception to obtain money or achieve another objective. They are criminals that attempt to deceive a victim into sending more or performing some other activity that benefits the scammer., and usually on a regular basis.

In the case of both Facebook and Google+ the modus operandi is is for the scammer to create a profile, populate it with a couple of photos (single digit number to be sure), and start harvesting victims by friending or following people with large contacts. This is not only a method for trolling for victims, but it is also a means for them to impersonate one or more of those victims, since the scammer needs “identities” to operate. This is why it is so critical to have your privacy settings to lock down you details and especially your photos – scammer burn through a HUGE number of photos – an average scammer scamScam A Scam is a confidence trick - a crime -  is an attempt to defraud a person or group after first gaining their trust through deception. Scams or confidence tricks exploit victims using their credulity, naïveté, compassion, vanity, irresponsibility, or greed and exploiting that. Researchers have defined confidence tricks as "a distinctive species of fraudulent conduct ... intending to further voluntary exchanges that are not mutually beneficial", as they "benefit con operators ('con men' - criminals) at the expense of their victims (the 'marks')". A scam is a crime even if no money was lost. use over 1,000 impersonations in just 6 months. In the meantime, the victims face is identified as a “Scammer” across the world. In women, it is mostly Porn Stars and Models who’s photos are stolen, and in men the current trend is US & European Military stolen from social media.

Now We Come to LinkedIn

Over the past two years, the scammers have been testing the waters here in LinkedIn, with the result that they are making an aggressive push forward.

Currently, scammers on LinkedIn run the gamut, from traditional Nigerians, Ghanaians, and other West Africans, to Asians and Russians. Each type has their particular business model, and each has their conversion percentages. However, in almost all cases the fake profiles share similarities that you should be on guard for. Remember, they may not be after you, but they are definitely after your contact list!

Scammers on Linked exhibit similar characteristics to those on other social media sites:

In a recent case, I received an Inmail from a Dubai venture capitalist, asking if I was looking for seed money. He has a profile that looked “odd” in that this was a person in his 60’s yet only had 10 years of work experience in his profile. He also had inconsistent education history.

After doing a Google image search and using TinEye.com (the two most powerful ways to verify a scam is to use their photos against them, that and their emails); I discovered the photo was of a UAE Defence Minister. I contacted the US Embassy for the country the scammer said he was based in, and confirmed that is was a real business, but that the profile name had no relationship with it. The profile was reported to LinkedIn, and to their credit they removed it. They story had a happy ending, in that the UAE did track down this scammer, and now awaits trial for impersonating a minister of their country. However, this is a rare event.

In that case, the scammer was on a phishing expedition to obtain business financial information that could be used for creating credit accounts and other purposes, including personal identity theftIdentity Theft Identity theft is when someone uses another person's personal identifying information, without their permission, to commit fraud or other crimes. In both the U.K. and the United States it is the theft of personally identifiable information. Identity theft deliberately uses someone else's identity as a method to gain financial advantages or obtain credit and other benefits, and perhaps to cause other person's loss. The person whose identity has been stolen may suffer adverse consequences, especially if they are falsely held responsible for the perpetrator's actions. Personally identifiable information generally includes a person's name, date of birth, social security number, driver's license number, bank account or credit card numbers, PINs, electronic signatures, fingerprints, passwords, or any other information that can be used to access a person's financial resources.. Just think about the information in your profile, and how that might be used to impersonate your identity.

LinkedIn, like Facebook, does have protections of a sort. Your greatest protection is to not “play the game” the scammer wants you to.

The following things are safeguards you should be using now!

The common types of LinkedIn Scams running are:

Scammers are clever but also dumb. They are smart and adapt, so always be on your guard. However, they are running a large scale business – a game of numbers – and do not have time for all the details usually, meaning they make mistakes – watch for those!

The best advice I can give you, having been on LinkedIn now almost 15 years, is clean out your contacts from time to time. If you don’t know them, or at least the company or profession, get rid of them. This is not a game where the biggest list wins! It is the quality of your list that matters in my humble opinion.

If you find a scammer, please drop me a message. It is up to each of us to make sure the bad guys don’t win wherever they are! If you have been a victim, I might be able to help.

Kudos to LinkedIn for being the most responsive social media on this topic!!!