RSN™ Insight: Amateur Anti-ScamScam A Scam is a confidence trick - a crime -  is an attempt to defraud a person or group after first gaining their trust through deception. Scams or confidence tricks exploit victims using their credulity, naïveté, compassion, vanity, irresponsibility, or greed and exploiting that. Researchers have defined confidence tricks as "a distinctive species of fraudulent conduct ... intending to further voluntary exchanges that are not mutually beneficial", as they "benefit con operators ('con men' - criminals) at the expense of their victims (the 'marks')". A scam is a crime even if no money was lost. Group Distributing Fake NewsFake news Fake news is false or misleading information presented as news. It often has the aim of damaging the reputation of a person or entity, or making money through advertising revenue. However, the term does not have a fixed definition and has been applied more broadly to include any type of false information, including unintentional and unconscious mechanisms, and also by high-profile individuals to apply to any news unfavourable to his/her personal perspectives.

For Those That Follow Us And Have For Some Time, You Know We Are Highly Critical About Other Amateur Anti-Scam Groups!

Many complain and ask us why we are hard on other groups? Why indeed?

They argue that they are all contributing to the greater good, right? The same could be said for amateur dentists or surgeons too, right? No, wrong.

The wrong information to the wrong person at the wrong time can have a profound impact. Scam victims commit suicide every day. This is not a game, it is people’s lives.

We Are Critical For The Following Reasons:

These are a few of the reasons why we hold so many groups in such disdain and is but one of the reasons why SCARSSCARS SCARS - Society of Citizens Against Relationship Scams Inc. A government registered crime victims' assistance & crime prevention nonprofit organization based in Miami, Florida, U.S.A. SCARS supports the victims of scams worldwide and through its partners in more than 60 countries around the world. Incorporated in 2015, its team has 30 years of continuous experience educating and supporting scam victims. Visit www.AgainstScams.org to learn more about SCARS. was created.

SCARS has a framework to help independent groups develop correctly and offer fact-based information and recovery support. In addition, SCARS requires that all of their members conform to their Code of Conduct and to the NOVA standard for Victims’ Assistance. Additionally, SCARS assures that members follow these or they are removed from SCARS membership and debarred permanently. No other anti-scam group has made any attempt to professionalize, and most do not even list the identities of their owner-operators.

Here is a perfect example of fake news from another anti-scam group: 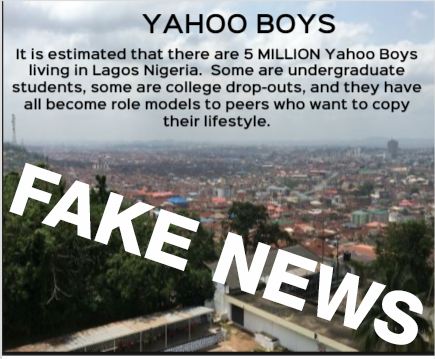 If the number were correct then one in four Lagos residents is a scammer. Frankly, that is laughably false. If 1 in 4 were scammers, there would be a total breakdown of all services in a major metro area – there would not be enough people to distribute services, provide healthcare, or any other businesses or industries in that region. EVERYTHING would be geared toward supporting the scammers, which is patently not true. Additionally, if it were true, the Yahoo Boys would represent a larger force than ISIS did. That would bring in the attention of the world’s military.

This Is A Perfect Example Of Clueless Fake News

Sadly, as you could see from a recent SCARS Infographic – recent victims flock to the new snake-oil salesmen in the guise of anti-scammers. Most victims end up in the hands of incompetent amateurs and kitchen table wanna-be experts. There is not a thing we can do about people grasping at other fakes thinking they know what they are saying.

All we can do is issue the warning, recognizing that this also brings the hatred of these groups down upon us in the process.

To New Victims, We Offer This Advice – Be Careful Out There – The Fakes Are Not Just The Ones That Ask For Your Money! Trust No One!