Top Nigerian ScammerScammer A Scammer or Fraudster is someone that engages in deception to obtain money or achieve another objective. They are criminals that attempt to deceive a victim into sending more or performing some other activity that benefits the scammer. Arested! 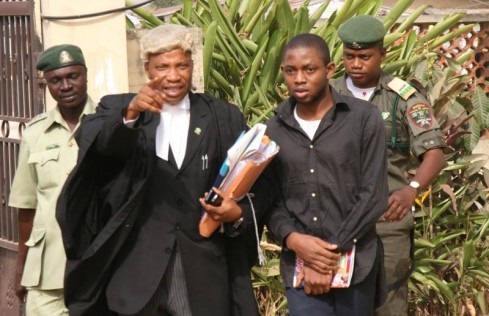 Nigerial Dating ScammersDating scammers Dating scammers or love scammers create fake identities on dating apps and social media to coax you into fake online relationships. They often quickly move to personal channels such as phone or email, using your trust to acquire money or personal info, or help you hide their criminal activities. You'll probably never meet them in person. This is a relationship scam. Caught – Olaniyi Makinde Victor (right), with his lawyer, A.A. Adetunji (left)

A 26 year old serial internet fraudsterFraudster A Scammer or Fraudster is someone that engages in deception to obtain money or achieve another objective. They are criminals that attempt to deceive a victim into sending more or performing some other activity that benefits the scammer., Olaniyi Victor Makinde who is top on the wanted list of the United States of America’s Federal Bureau of Investigation, FBIFBI FBI - Federal Bureau of Investigation The Federal Bureau of Investigation (FBI) is the domestic intelligence and security service of the United States and its principal federal law enforcement agency. Operating under the jurisdiction of the United States Department of Justice, the FBI is also a member of the U.S. Intelligence Community and reports to both the Attorney General and the Director of National Intelligence. A leading U.S. counter-terrorism, counterintelligence, and criminal investigative organization, the FBI has jurisdiction over violations of more than 200 categories of federal crimes, including financial fraud. has been arrested in Akure, the Ondo state capital by Nigeria’s anti-graft police, EFCCEFCC Economic and Financial Crimes Commission The Economic and Financial Crimes Commission (EFCC) is a Nigerian law enforcement agency that investigates financial crimes such as advance fee fraud (419 fraud), scams, and money laundering. The EFCC was established in 2003, partially in response to pressure from the Financial Action Task Force on Money Laundering (FATF), which named Nigeria as one of 23 countries non-cooperative in the international community's efforts to fight money laundering. The agency has its head office in Abuja, Nigeria..

A source in FBI had hinted iReports-ng that Makinde who is also known as Olaniyi Jones and Andrea Bradley was wanted by the San Francisco Division of the FBI. According to the source, the US government viewed the activities of Makinde seriously and as such had to send three FBI agents including a supervisory special agent and two special agents, to Nigeria last quarter to meet with their Nigerian counterparts over the arrest of the fraudster. The fraudster was eventually arrested on September 6 last year.

iReports-ng learnt that the FBI agents were also joined by another official of the US consulate Lagos to obtain statements from Makinde when he was eventually arrested by EFCC operatives ahead of their request for his extradition to the US to face trial with some of his American accomplices in the serial fraudFraud In law, fraud is intentional deception to secure unfair or unlawful gain (money or other assets), or to deprive a victim of a legal right. Fraud can violate civil law (e.g., a fraud victim may sue the fraud perpetrator to avoid the fraud or recover monetary compensation) or criminal law (e.g., a fraud perpetrator may be prosecuted and imprisoned by governmental authorities), or it may cause no loss of money, property, or legal right but still be an element of another civil or criminal wrong. The purpose of fraud may be monetary gain or other benefits, for example by obtaining a passport, travel document, or driver's license, or mortgage fraud, where the perpetrator may attempt to qualify for a mortgage by way of false statements. A fraud can also be a hoax, which is a distinct concept that involves deliberate deception without the intention of gain or of materially damaging or depriving a victim.. The Nigerian authorities were said to have reached an agreement with the FBI agents to prosecute Makinde in Nigeria before considering handing him over to the US government. He was said to have been arraigned before a high court judge in Akure on November 26 last year over a $620,225.04 fraud and later remanded at a prison custody in the state capital.

It was however drama galore on Tuesday, January 11, when the 26-year old internet fraudster already in custody at the Olokuta medium prison, Akure , was docked again by EFCC, over a fresh $150,000 scamScam A Scam is a confidence trick - a crime -  is an attempt to defraud a person or group after first gaining their trust through deception. Scams or confidence tricks exploit victims using their credulity, naïveté, compassion, vanity, irresponsibility, or greed and exploiting that. Researchers have defined confidence tricks as "a distinctive species of fraudulent conduct ... intending to further voluntary exchanges that are not mutually beneficial", as they "benefit con operators ('con men' - criminals) at the expense of their victims (the 'marks')". A scam is a crime even if no money was lost.. The fraudster, Olaniyi Victor Makinde, a fresh graduate of the University of Ado Ekiti , was docked at an Akure High Court presided by Justice A.O Adebusuyi on a 14 count charge bordering on obtaining money by false pretense and stealing. In his first arraignment before Justice Olasehinde Kumuyi of the same Court, nine count charges were preferred against him also bordering on stealing and obtaining money by false pretence. He allegedly obtained a total of $620,225.04 from two Americans: Marilou Sibbaluca and John Massoni in a marriage scam. However, the accused pleaded not guilty to all the charges preferred against him. Trouble started for Makinde when investigations revealed that he had been defrauding several foreigners, especially Americans in marriage scam and related offences, through the internet. He was also accused of masterminding serious hacking practices against an American online pay rollservices company, Intuit, in California .

When the latest 14 count charges were read to him, he pleaded not guilty to them.

The defence counsel, Mr. A.A. Adetunji, thereafter made an oral application for bail which was successful. The judge granted the accused bail in the sum of N20million with two sureties in like sum who must swear to an affidavit of means of livelihood and with landed property in Akure. He also granted the prosecution’s prayer for the accelerated hearing of the case. The Judge added that during the trial he would not entertain any frivolous application meant to delay the trial and he threatened to revoke the bail granted the accused if there was any delay. He therefore adjourned the case to February 21 -25 for trial. The accused person has not been granted bail on the initial charges preferred against him. Justice Adebusuyi reserved ruling on the bail application till January 18

Makinde finished with second class honours in Economics from UNAD. He started his 419419 An advance fee scam or fraud (419 scam) is a form of fraud and is one of the most common types of online confidence tricks. The scam typically involves promising the victim a significant share of a large sum of money, in return for a small up-front payment, which the fraudster claims will be used to obtain the large sum. If a victim makes the payment, the fraudster either invents a series of further fees for the victim or simply disappears. The 419 comes from the Nigerian law against this type of scam. heist early 2009 while he was still an undergraduate.

He and other members of his gangGang A gang is normally a group or society of associated criminals with a defined leadership and internal organization that identifies with or claims control over a territory or business practice in a community and engages, either individually or collectively, in illegal, and possibly violent, behavior. Online gangs are not limited by territory and may operate side by side with other gangs while engaging in crime online. Some members of criminal gangs are initiated (by going through a process of initiation), or have to prove their loyalty and right to belong by committing certain acts, usually theft or violence, or rituals. Gangs are usually rougher and more visible than scammer cartels, and more often arrested. who are now at large went to a dating site on the internet and started chatting with some American ladies and men who fell prey to their 419 scheme. Depending on the sex of his victim, Makinde sometimes presented himself as an American woman looking for a husband and to make assurance doubly sure, he would download a beautiful picture of an American lady from the internet and sent it to the victim as his picture. If the victim is a woman he would do the exact opposite. This way, Makinde had been fleecing his victims until the game was up for him.

In some instances, he had presented himself as someone from a wealthy home and introduced a phony business to the victims and invited them to be his partners. Sometimes, he presented himself as an indigent lady needing help and support. With these kinds of stories, many people fell victim and lost thousands of dollars to the syndicate.

But the long arm of the law caught up with him mid last year when some of the victims petitioned the EFCC through the FBI. The operatives were said to have swung to action immediately and within a short time, he was traced to Akure where he resides. He was caught with different incriminating documents and several fake identity cards bearing foreign names which he was using to defraud people. During interrogation, he confessed to the crime but added that he was not the only person involved and that the ring leader had traveled to Holland . He admitted that he collected only N2.5million from the proceeds of the crime. He also added that his parents and siblings did not know that he was a fraudster.