RSN™ ScamScam A Scam is a confidence trick - a crime -  is an attempt to defraud a person or group after first gaining their trust through deception. Scams or confidence tricks exploit victims using their credulity, naïveté, compassion, vanity, irresponsibility, or greed and exploiting that. Researchers have defined confidence tricks as "a distinctive species of fraudulent conduct ... intending to further voluntary exchanges that are not mutually beneficial", as they "benefit con operators ('con men' - criminals) at the expense of their victims (the 'marks')". A scam is a crime even if no money was lost. News: Nigerians Arrest $1,450,000 CDN Dollar Romance ScammerScammer A Scammer or Fraudster is someone that engages in deception to obtain money or achieve another objective. They are criminals that attempt to deceive a victim into sending more or performing some other activity that benefits the scammer.

He was arraigned on a six-count charge bordering on obtaining money by false pretense and possession of documents containing false pretense contrary to Nigeria’s Section1 (1), Section 6 and 8 punishable under Section 1(3) of the Advance Fee FraudAdvance Fee Fraud An advance fee scam or fraud is a form of fraud and is one of the most common types of online confidence tricks. The scam typically involves promising the victim a significant share of a large sum of money, in return for a small up-front payment, which the fraudster claims will be used to obtain the large sum. If a victim makes the payment, the fraudster either invents a series of further fees for the victim or simply disappears. and Other FraudFraud In law, fraud is intentional deception to secure unfair or unlawful gain (money or other assets), or to deprive a victim of a legal right. Fraud can violate civil law (e.g., a fraud victim may sue the fraud perpetrator to avoid the fraud or recover monetary compensation) or criminal law (e.g., a fraud perpetrator may be prosecuted and imprisoned by governmental authorities), or it may cause no loss of money, property, or legal right but still be an element of another civil or criminal wrong. The purpose of fraud may be monetary gain or other benefits, for example by obtaining a passport, travel document, or driver's license, or mortgage fraud, where the perpetrator may attempt to qualify for a mortgage by way of false statements. A fraud can also be a hoax, which is a distinct concept that involves deliberate deception without the intention of gain or of materially damaging or depriving a victim. Related Offences Act 2006.

Benjamin was arrested following an Intelligence Report received in August, 2018, alleging that he is involved in internet fraud and has also defrauded as many as 1,000  foreigners of their money through online fraudulent schemes including romance scamsScams A Scam is a confidence trick - a crime -  is an attempt to defraud a person or group after first gaining their trust through deception. Scams or confidence tricks exploit victims using their credulity, naïveté, compassion, vanity, irresponsibility, or greed and exploiting that. Researchers have defined confidence tricks as "a distinctive species of fraudulent conduct ... intending to further voluntary exchanges that are not mutually beneficial", as they "benefit con operators ('con men' - criminals) at the expense of their victims (the 'marks')". A scam is a crime even if no money was lost..

The report, however, stated that Benjamin used the proceeds of his fraud to buy two cars, and also own a unisex beauty salon known as “Signatures Unisex Salon” located at No. 238, Ilawe Road, opposite Baptist School, Ado-Ekiti, Ekiti State, Nigeria.

One of the criminalCriminal A criminal is any person who through a decision or act engages in a crime. This can be complicated, as many people break laws unknowingly, however, in our context, it is a person who makes a decision to engage in unlawful acts or to place themselves with others who do this. A criminal always has the ability to decide not to break the law, or if they initially engage in crime to stop doing it, but instead continues. charge counts reads:

“That you Oke Omoniyi Benjamin on or about the 27th of April, 2018 at Ado-Ekiti within the Ado-Ekiti jurisdiction of this Honourable Court with intent to defraud, obtained the sum of $1,450,000 Canadian Dollars (One Million Four Hundred and Fifty Thousand Canadian Dollars) through Western Union money transfer from one Ms. Joan Derk, a Canadian by falsely representing that you are one “Sergeant Johnson” a United States of America Marine and that the money was needed for preparations towards your marriage with her; which representation you knew to be false and thereby committed an offence contrary to Section 1(1)(a)and punishable under Section 1(3) of the Advance Fee Fraud and Other Fraud Related Offences Act 2006”.

“That you Oke Omoniyi Benjamin on or about the 3rd October, 2018 at Ado-Ekiti within the Ado-Ekiti jurisdiction of this Honourable Court with intent to defraud, knowingly had in your possession some documents to wit: online Instagram conversation with one Ms. Karen Hart a lady, citizen of United States of America, wherein you pretended to be one “Sergeant Johnson” of the United States of America Marine, which document contained false pretences and thereby committed an offence contrary to Section 6 and 8 (b) punishable under Section 1(3) of the Advance Fee Fraud and Other Fraud Related Offences Act 2006”. 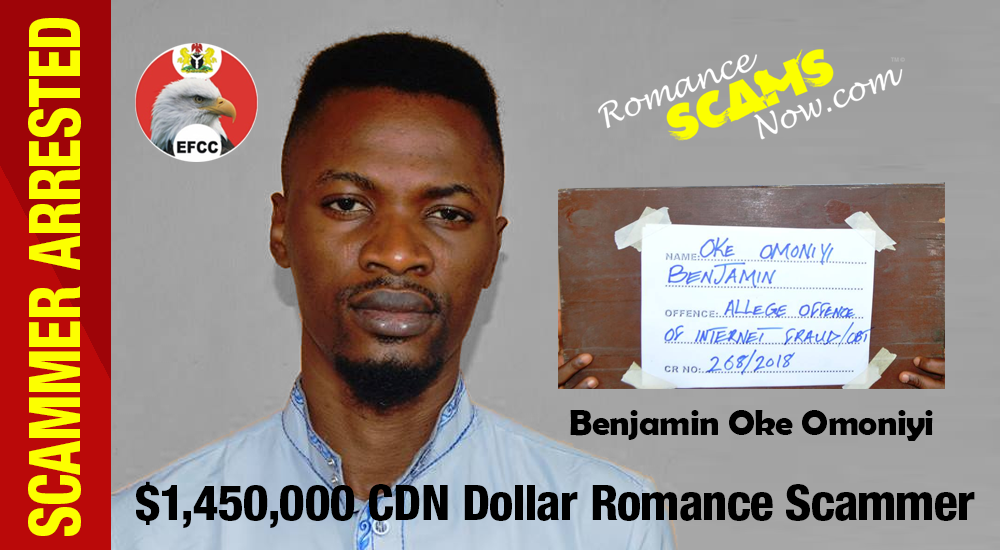 Benjamin, however, pleaded not guilty to the charges against him. In view of his plea, the prosecuting counsel, S. M. Galadanchi approached the court for a trial date. The defense counsel, C.O. Omukhafe presented a bail application on behalf of the defendant to which prosecution counsel, however, asked the court for time to study and enable him to react to the application.

This Arrest Represents One Of The Largest Individual (Non-CartelCartel A scamming cartel is any criminal organization with the intention of engaging in larger-scale financial fraud operations. They range from loosely managed agreements among various scammer gangs to formalized commercial enterprises. The term was applied when the largest scammer gangs organizations reached a size and scope of a major enterprise, including control of corrupt politicians and local officials. In truth, most scammer cartels do not exactly meet the definition of a cartel, but the term stuck and it is now popularly used to refer to any large criminal fraud organization.) Scammer Arrests In Terms Of The Money Scammed From Individual Victims.