As usual, only about 3% of victims will report their crime to the government. So the result is that 97% of the numbers are unknown to them. 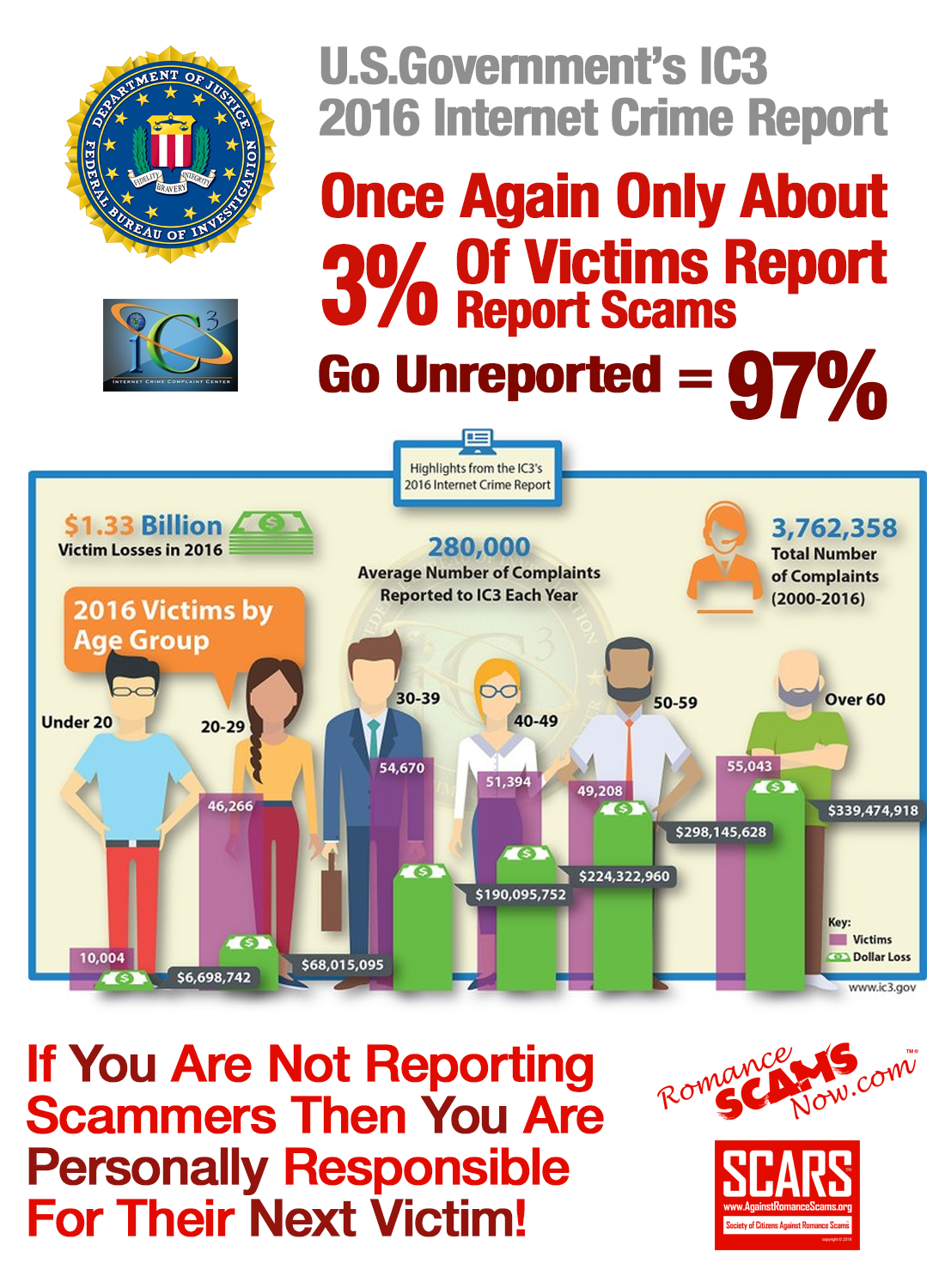 The result of the constant under-reporting by victims is that government neither fully understands the scope and magnitude of these crime, and they also do not know how to prioritize resources to stop them. The result is that every victim that fails to report these crimes is further enabling the scammers and online criminals to go after another person.

Think about that for a moment?

By not reporting the crime YOU are allowing the scammers and the criminals to get away with it.

Here are the highlights from the IC3 Report:

Giving someone access to your computer is like giving out a key to your front door. A computer can have your bank account information, family photos, and other private documents and data—information that fraudsters would like to steal. That’s why tech support fraudFraud In law, fraud is intentional deception to secure unfair or unlawful gain (money or other assets), or to deprive a victim of a legal right. Fraud can violate civil law (e.g., a fraud victim may sue the fraud perpetrator to avoid the fraud or recover monetary compensation) or criminal law (e.g., a fraud perpetrator may be prosecuted and imprisoned by governmental authorities), or it may cause no loss of money, property, or legal right but still be an element of another civil or criminal wrong. The purpose of fraud may be monetary gain or other benefits, for example by obtaining a passport, travel document, or driver's license, or mortgage fraud, where the perpetrator may attempt to qualify for a mortgage by way of false statements. A fraud can also be a hoax, which is a distinct concept that involves deliberate deception without the intention of gain or of materially damaging or depriving a victim. has become a significant trend in online crime, according to the 2016 Internet Crime Report from the FBIFBI FBI - Federal Bureau of Investigation The Federal Bureau of Investigation (FBI) is the domestic intelligence and security service of the United States and its principal federal law enforcement agency. Operating under the jurisdiction of the United States Department of Justice, the FBI is also a member of the U.S. Intelligence Community and reports to both the Attorney General and the Director of National Intelligence. A leading U.S. counter-terrorism, counterintelligence, and criminal investigative organization, the FBI has jurisdiction over violations of more than 200 categories of federal crimes, including financial fraud.’s Internet Crime Complaint Center (IC3).

In tech support fraud cases, criminals convince unsuspecting victims to provide remote access to their computer by calling and posing as tech support personnel from a legitimate company. The criminalCriminal A criminal is any person who through a decision or act engages in a crime. This can be complicated, as many people break laws unknowingly, however, in our context, it is a person who makes a decision to engage in unlawful acts or to place themselves with others who do this. A criminal always has the ability to decide not to break the law, or if they initially engage in crime to stop doing it, but instead continues. can then simply charge your credit card for a fake anti-virusVirus A computer program that can replicate itself and spread from computer to computer or file to file. It comes to life only when you take a specific action, such as running a particular program. product, or, in more sinister situations, they can steal your personal information or install malwareMalware Short for "malicious software," this term means computer viruses and other types of programs that cybercriminals use to disrupt or access your computer, typically with the aim of gathering sensitive files and accounts.. More than 10,000 incidents of tech support fraud were reported to the IC3 in 2016, with victims losing nearly $8 million. Though anyone can be a victim, older computer users are the most vulnerable targets.

“They’ll trick you into letting them into your computer,” said IC3 Unit Chief Donna Gregory. “You open the door and allow them in. You may think you’re just watching them install a program to get rid of a virus, but they are really doing a lot of damage behind the scenes.”

In addition to tech support fraud, the other major fraud categories last year were business e-mail compromiseBusiness E-mail Compromise This financial fraud targets businesses engaged in international commerce. Scammers gain access to company e-mail and trick employees into sending money to a “supplier” or “business partner” overseas., ransomwareRansomware Ransomware is a type of malware from cryptovirology that threatens to publish the victim's personal data or perpetually block access to it unless a ransom is paid. While some simple ransomware may lock the system so that it is not difficult for a knowledgeable person to reverse, more advanced malware uses a technique called cryptoviral extortion. It encrypts the victim's files, making them inaccessible, and demands a ransom payment to decrypt them. In a properly implemented cryptoviral extortion attack, recovering the files without the decryption key is an intractable problem – and difficult to trace digital currencies such as paysafecard or Bitcoin and other cryptocurrencies that are used for the ransoms, making tracing and prosecuting the perpetrators difficult. Ransomware attacks are typically carried out using a Trojan virus disguised as a legitimate file that the user is tricked into downloading or opening when it arrives as an email attachment. However, one high-profile example, the WannaCry worm, traveled automatically between computers without user interaction., and extortion.

The IC3 receives complaints on a variety of Internet scamsScams A Scam is a confidence trick - a crime -  is an attempt to defraud a person or group after first gaining their trust through deception. Scams or confidence tricks exploit victims using their credulity, naïveté, compassion, vanity, irresponsibility, or greed and exploiting that. Researchers have defined confidence tricks as "a distinctive species of fraudulent conduct ... intending to further voluntary exchanges that are not mutually beneficial", as they "benefit con operators ('con men' - criminals) at the expense of their victims (the 'marks')". A scam is a crime even if no money was lost. and crimes, and it has received more than 3.7 million complaints since it was created in 2000. In 2016, the IC3 received a total of 298,728 complaints with reported losses in excess of $1.3 billion. The IC3 uses the information from public complaints to refer cases to the appropriate law enforcement agencies and identify trends. The IC3’s extensive database is also available to law enforcement. Internet users should report any Internet fraud to IC3, no matter the dollar amount. Additional data helps the FBI and law enforcement gain a more accurate picture of Internet crime.

The IC3 publishes the Internet Crime Report annually to increase public awareness of current trends in Internet crime. For this report, the IC3 has also created a separate state-by-state breakdown that allows users to select their state from a dropdown menu so they can review local trends in Internet crime. The top states for reported dollar amounts lost to Internet fraud in 2016 were California ($255 million), New York ($106 million), and Florida ($89 million).

Though Internet crime is a serious threat, there are ways to help keep yourself safe online. The IC3 recommends computer users update their anti-virus software and operating system. Additionally, the Internet is an especially important place to remember the old adage: If it sounds too good to be true, it probably is.

“Be aware of what you are clicking on and also what you’re posting on social media. Always lock down your social media accounts as much as possible,” Gregory said. “Try to use two factor authentication, and use safe passwords or things more difficult to guess. The tougher the password, the harder it is for someone to crack.”

For more information or to submit a complaint, visit www.ic3.gov AND also report it at www.Anyscam.com or this website too!