RSN™ SCAMScam A Scam is a confidence trick - a crime -  is an attempt to defraud a person or group after first gaining their trust through deception. Scams or confidence tricks exploit victims using their credulity, naïveté, compassion, vanity, irresponsibility, or greed and exploiting that. Researchers have defined confidence tricks as "a distinctive species of fraudulent conduct ... intending to further voluntary exchanges that are not mutually beneficial", as they "benefit con operators ('con men' - criminals) at the expense of their victims (the 'marks')". A scam is a crime even if no money was lost. NEWS: Ghana Sakawa Boy Throws Money Away

This is the story of a 17-year-old alleged ‘sakawa’ boy, Money Beast, who has been captured on camera spraying cash around to flex his financial muscle.

The video of the said ‘sakawa’ boy, which has since gone viral on social media, raised many questions as to why he was throwing money away.

The young man, affectionately called Money Beast, probably because of the way he treats money, has said that sharing money is part of his corporate social responsibilities.

According to him, he finds it necessary to share money especially with the less-privileged because it is one of the ways in which he can share his achievements with the people in his locality.

Money Beast, a Nigerian who resides in the Central Region of Ghana, is noted for always traveling in a convoy and putting smiles on people’s faces while on the road.

Some of his social media photos showed him posing with huge sums of money and a money counting machine.

You can see him burn money here » 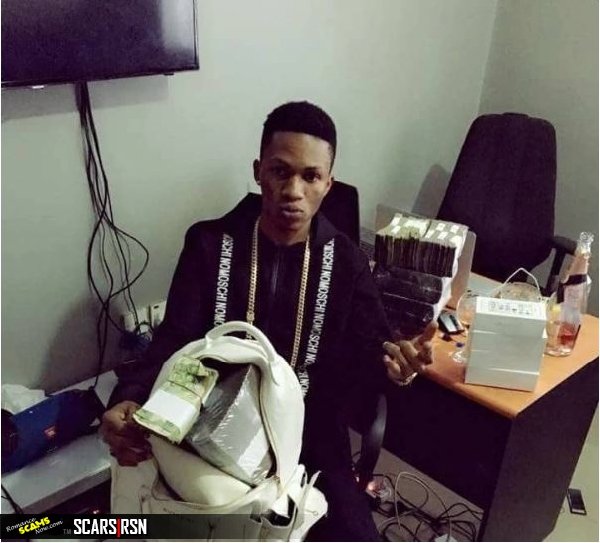