RSN™ SCAMScam A Scam is a confidence trick - a crime -  is an attempt to defraud a person or group after first gaining their trust through deception. Scams or confidence tricks exploit victims using their credulity, naïveté, compassion, vanity, irresponsibility, or greed and exploiting that. Researchers have defined confidence tricks as "a distinctive species of fraudulent conduct ... intending to further voluntary exchanges that are not mutually beneficial", as they "benefit con operators ('con men' - criminals) at the expense of their victims (the 'marks')". A scam is a crime even if no money was lost. NEWS: Ghana Sakawa Boy ScammerScammer A Scammer or Fraudster is someone that engages in deception to obtain money or achieve another objective. They are criminals that attempt to deceive a victim into sending more or performing some other activity that benefits the scammer. Caught

Ghana Police announce the arrest of a Sakawa Boy scammer who had in his possession human skull and parts exhumed from Gomoa cemetery. 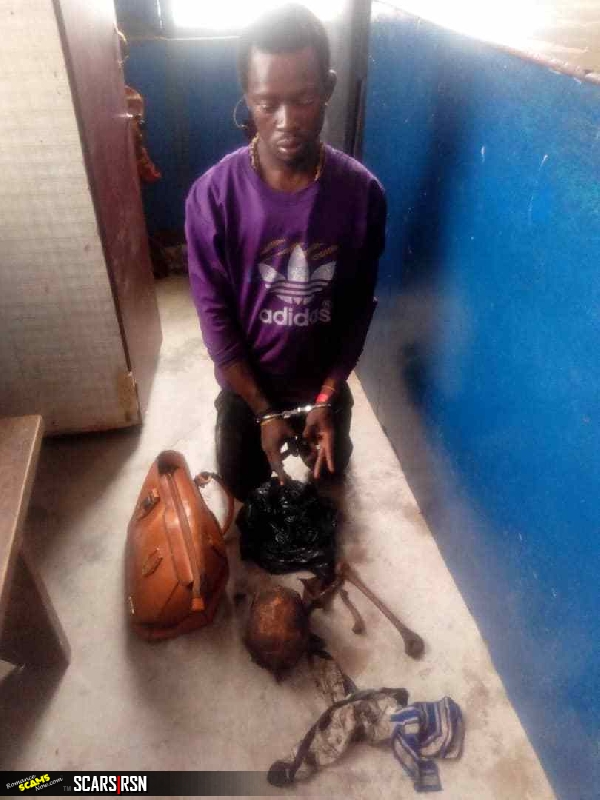 Sakawa boy caught at Gomoa Cemetery exhuming skull, bones – Samuel Dzamesi is in the custody of the police

The incident which was reported by Bryt FM through its Central Regional correspondent, Eric Owusu Amponsah who said the suspect was arrested by Rashid Wahilu with the help of Isaac Baiden, caretakers at the cemetery with human skull and wrist.

Rashid Wahilu confirmed the incident. He said the suspect was caught with a brown bag coming out of the cemetery and upon questioning he confessed to digging in one of the tombs for the human parts.

“I and my brother, Baiden are mandated to man the cemetery to check any unforeseen acts so we were on our daily chore when I saw the guy (suspect). After asking what he was doing at the cemetery, he openly confessed of digging for human skull and wrist” Rashid said.

The District Police Commander for Gomoa, DSP Johnson Jessey said police have begun the investigation into the matter.

The suspect is however alleged to have mental issues.

But police are not taking chances as they believe the youth are involved in Sakawa and the skulls could come in handy.

The suspect is due to appear in court.

It is essential that law enforcement knows about scamsScams A Scam is a confidence trick - a crime -  is an attempt to defraud a person or group after first gaining their trust through deception. Scams or confidence tricks exploit victims using their credulity, naïveté, compassion, vanity, irresponsibility, or greed and exploiting that.