RSN™ SCAMScam A Scam is a confidence trick - a crime -  is an attempt to defraud a person or group after first gaining their trust through deception. Scams or confidence tricks exploit victims using their credulity, naïveté, compassion, vanity, irresponsibility, or greed and exploiting that. Researchers have defined confidence tricks as "a distinctive species of fraudulent conduct ... intending to further voluntary exchanges that are not mutually beneficial", as they "benefit con operators ('con men' - criminals) at the expense of their victims (the 'marks')". A scam is a crime even if no money was lost. NEWS: Eight Scammers Arrested In Ghana & The U.S.A. For Defrauding Americans

An Entire Ghana GangGang A gang is normally a group or society of associated criminals with a defined leadership and internal organization that identifies with or claims control over a territory or business practice in a community and engages, either individually or collectively, in illegal, and possibly violent, behavior. Online gangs are not limited by territory and may operate side by side with other gangs while engaging in crime online. Some members of criminal gangs are initiated (by going through a process of initiation), or have to prove their loyalty and right to belong by committing certain acts, usually theft or violence, or rituals. Gangs are usually rougher and more visible than scammer cartels, and more often arrested. Arrested – Including American & Latino Accomplices (Mules) In The U.S. 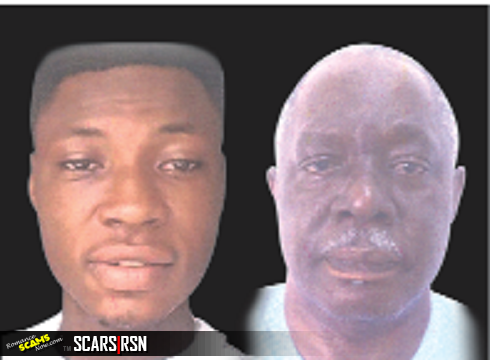 Eight individuals, including three Ghanaians, have been arrested for allegedly defrauding companies and citizens of the United States of America (USA) to the tune of $15 million.

Two of the suspects, both Ghanaians — Babatunde Martins, 62, and Maxwell Atugba Abayeta, alias Maxwell Peter, 26 — escaped to Ghana after allegedly committing the crime and have been arrested in Accra, awaiting extradition to the US to stand trial in the Western District of Tennessee.

The names of the five other suspects arrested in the U.S. for playing various roles in the conspiracy are Javier Luis Ramos Alonso, 28, a Mexican residing in Seaside, California who acted as a MuleMule A money mule sometimes called a "smurfer," is a person who transfers money acquired illegally (e.g., stolen) in person, through a courier service, or electronically, on behalf of others (usually criminals that they are knowingly or unknowingly affiliated). Typically, the mule is paid for services with a small part of the money transferred - but not always. Mules may or may not be aware that they are performing these actions. Money mules are often dupes recruited online for what they think is legitimate employment, not aware that the money they are transferring is the product of crime. The money is transferred from the mule's account to the scam operator, typically in another country. Similar techniques are used to transfer illegal merchandise. Mules can be prosecuted for numerous crimes. to receive money and property; James Dean, 65, of Plainfield, Indiana another Mule; Dana Brady, 61, of Auburn, Washington also a Mule; Rashid Abdulai, 24, a Ghanaian residing in the Bronx, New York, and Olufolajimi Abegunde, 31, a Nigerian residing in Atlanta, Georgia.

According to information from the U.S. Justice Department, an eighth suspect, Bernard Emurhowhoariogho Okorhi, 39, a Nigerian who is said to be residing in Ghana, was yet to be arrested.

The release commended Ghana’s Economic and Organised Crime Office (EOCO) for collaborating with U.S. officials to arrest some of the suspects.

Explaining the arrest further, an acting Assistant Attorney-General of the U.S., Mr. John P. Cronan, said the suspects allegedly unleashed a barrage of international fraudFraud In law, fraud is intentional deception to secure unfair or unlawful gain (money or other assets), or to deprive a victim of a legal right. Fraud can violate civil law (e.g., a fraud victim may sue the fraud perpetrator to avoid the fraud or recover monetary compensation) or criminal law (e.g., a fraud perpetrator may be prosecuted and imprisoned by governmental authorities), or it may cause no loss of money, property, or legal right but still be an element of another civil or criminal wrong. The purpose of fraud may be monetary gain or other benefits, for example by obtaining a passport, travel document, or driver's license, or mortgage fraud, where the perpetrator may attempt to qualify for a mortgage by way of false statements. A fraud can also be a hoax, which is a distinct concept that involves deliberate deception without the intention of gain or of materially damaging or depriving a victim. schemes that targeted U.S. businesses and individuals, robbing them to the tune of approximately $15 million.

The accused are said to have engaged in the acts since 2012.

The U.S.A. and its international partners are cooperating in a programme dubbed: “Operation Keyboard Warrior”, to disrupt and bring an end to online fraud perpetrated from Africa.

Using sophisticated anonymization techniques, including the use of spoofed email addresses and Virtual Private Networks (VPNVPN A VPN (also known as a proxy) is an app or connection method that keeps your internet connection private, whether you're connecting to unsafe public Wi-Fi or your network at home. Having a layer of security that blocks people from watching you browse helps keep you safe online, no matter where you connect from. Virtual private networks protect you by creating an encrypted "tunnel" that all of your device's data travels through on its way to the internet via a proxy server or service. Encryption turns words and data, like text files, into a secret code. If someone tries to read encrypted data without the password, they'll see random gibberish.), the co-conspirators identified large financial transactions, initiated fraudulent email correspondence with relevant business parties and then redirected closing funds through a network of US-based money mulesMoney mules Money mules are a type of money laundering where a person transfers illicit funds through a medium (such as a bank account) to obfuscate where the money came from. There are different types of money mules including witting, unwitting, and complicit. to final destinations in Africa.

Commonly referred to as business email compromise or BEC, this aspect of the scheme caused hundreds of thousands in losses to companies and individuals in Memphis, Tennessee.

Additionally, some of the Africa-based suspects who are yet to be extradited would be charged with perpetrating or causing to be perpetrated various romance scamsScams A Scam is a confidence trick - a crime -  is an attempt to defraud a person or group after first gaining their trust through deception. Scams or confidence tricks exploit victims using their credulity, naïveté, compassion, vanity, irresponsibility, or greed and exploiting that. Researchers have defined confidence tricks as "a distinctive species of fraudulent conduct ... intending to further voluntary exchanges that are not mutually beneficial", as they "benefit con operators ('con men' - criminals) at the expense of their victims (the 'marks')". A scam is a crime even if no money was lost., fraudulent-check, gold-buying, advance-fee, and credit card scamsCredit Card Scams Scam callers pretending to represent banks and credit card companies use a variety of tactics, such as bogus fraud alerts or promises of lowered interest rates, to steal your personal information and your credit..

Mr. Coran gave an assurance that the U.S. Department of Justice would continue to work with its international partners to aggressively disrupt and dismantle criminalCriminal A criminal is any person who through a decision or act engages in a crime. This can be complicated, as many people break laws unknowingly, however, in our context, it is a person who makes a decision to engage in unlawful acts or to place themselves with others who do this. A criminal always has the ability to decide not to break the law, or if they initially engage in crime to stop doing it, but instead continues. enterprises that victimized U.S. citizens and businesses.

Commenting on the arrests, the Executive Assistant Director at the U.S. Federal Bureau of Investigations (FBIFBI FBI - Federal Bureau of Investigation The Federal Bureau of Investigation (FBI) is the domestic intelligence and security service of the United States and its principal federal law enforcement agency. Operating under the jurisdiction of the United States Department of Justice, the FBI is also a member of the U.S. Intelligence Community and reports to both the Attorney General and the Director of National Intelligence. A leading U.S. counter-terrorism, counterintelligence, and criminal investigative organization, the FBI has jurisdiction over violations of more than 200 categories of federal crimes, including financial fraud.), Mr David Resch, said the indictment of persons caught in cyber fraud continued to demonstrate the commitment of the FBI to work with its partners around the globe “to disrupt and dismantle criminal enterprises that target Americans and their businesses”.

“This should stand as a warning that our work is not over and that we will continue to work together with our law enforcement partners to put an end to these fraud schemes.

“I want to thank all the agents and analysts at the FBI, our partners at the Department of Justice and our Ghanaian partners at the Economic and Organised Crime Office for all their tireless work to continue to pursue this issue at every turn,” he said.

The FBI Led The Investigations